Five or six years ago, I realized there was a large contingency of fine artists in our membership, yet most were not creating or showing their fine art work. At a C3 function, I was introduced to George Berlin, who pointed me in the direction of Kevin Lahvic and the Flat Iron Artist Association.

Kevin gave us a deal for space and a room in the Flat Iron building for their three-day Christmas show. We had 12 artists showing their work, some for the first time. The following year, we joined Kevin in the Beyond the Coyote show with 11 artists, some changed from the previous year. We followed up with Coyote shows the next three years. Out of these shows, many artists sold their work: Nate Marks (painting), Bob Tolchin and Lila Stromer (photography), Cindy McEwen and Carolyn Aronson (jewelry), and Laura Marie Sanchez (mosaic), to name a few. 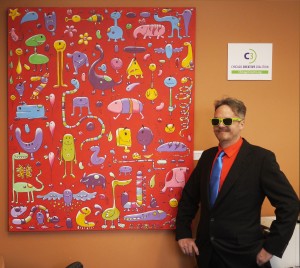 George revels at the brightness of his genius.
Photo by Stan Kotecki.

A few artists got other showings from their exposure in the C3 group shows: Mike and David Tanimura joined forces with another father/son duo for a show; David just completed a one-man show at a Wicker Park gallery; and Mary Wagner got a one-woman show at an architectural firm.

This summer C3 sponsored its first juried art show, PhotoArt Fest. There were 200 photographs submitted for judging, and the top 50 were exhibited at Jeff Fest. The show was a great success! We moved the show’s winning entries plus the work of nine C3 members and one of our non-member judges to the gallery office of 45th Ward Alderman John Arena, one of the sponsors of Jeff Fest and PhotoArt Fest (and a former C3 member). At the opening reception at the gallery, most of the artists were on hand to greet neighborhood families coming to enjoy the art.

One wall of the Fringe Fest Box Office Gallery. Photo by David Tanimura 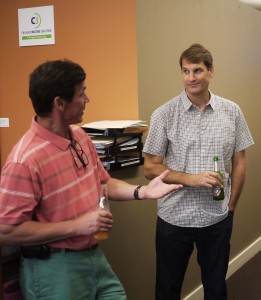 At a neighborhood fundraising function I attended recently, I was introduced to Vinnie Lancy, executive director of Chicago Fringe Festival. He spoke of trying to get some art for the festival’s makeshift box office. I offered the C3 artists and put out the call. Today we have 12 artists showing at the Fringe Fest Box Office Gallery, again some for the first time. The fest starts August 29 and plays through September 8. The box office is located at 5340 W. Lawrence Ave. You can find the complete list of Fringe Plays at http://chicagofringe.org/.