When artists create work about things that they care about, they make better art. This series aims to explore all the ways that “passion projects” emerge, evolve, develop, are supported, funded and deployed.

Why do you make the work that you make, and how does it affect change? These are the key questions we pose to participants, who will share their stories in images, words and interactive sessions. 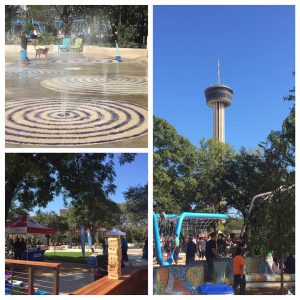 Ever take a job when there was no job site? Anne Krause did. Originally from Aurora, Illinois, Anne has been in San Antonio, Texas for 17 years. She is the President & Executive Director of the Hemisfair Conservancy, an agency she co-founded in 2014.

Art is a critical part of Hemisfair’s growing landscape, from interactive pieces made for crawling and climbing to murals created by local and international artists alike. Yanaguana Garden, the first development of three planned public parks, was designed to be an inclusive space and follows the American Disabilities Act standards for public playgrounds. Adaptive play equipment allows wheelchair users and little ones to join in on the playground fun.

In the evening, Yanaguana Garden is lit up with artistic colors, inviting diners to stroll toward one of the lively outdoor eateries. Built on a portion of the site of the 1968 World’s Fair, Yanaguana Garden at Hemisfair is named for the Payaya Indian village located in the area that would become San Antonio. The landscape of the park was thoughtfully designed to capture, infiltrate and evaporate 34% of the average annual rainfall using infiltration and permeable play surfaces. The landscape design and tree canopy keeps air temperatures on a typical June day at an average of 7°F cooler in the morning and 12°F cooler in the afternoon than those in an adjacent park without mature trees! 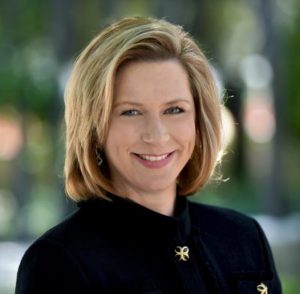 Anne, who is passionate about art, education and community, received a BS from the United States Air Force Academy, an MA from the University of Texas at Austin, and completed a non-profit executive program at Harvard Business School. Anne began her career as an Air Force officer, had the privilege of flying jets, deployed to Cuba as the Officer in Charge of linguist operations and served as the Executive Officer for the USAF Thunderbirds demonstration team.

Register in advance for this program:
Zoom Registration Link

After registering, you will receive a confirmation email containing information about joining the meeting.